As you may or may not be aware, I attended Summer in the City 2014 and so I feel like sharing with you all of my experience and time there, and some advice to share with you if you’re thinking of attending the event in the near future. I want to be honest as possible with this blog post, I don’t want it to put you off and I’m not slating the event at all because if you’ve been on twitter or instagram recently you will know I had an amazing time.
There is a lot of queuing at Summer in the City (SitC), and you might be thinking that I’m pointing out the obvious here, but there is SO MUCH QUEUING. If you have no patience or very little you’ll struggle trust me. It was absolute mayhem, and me and my friend Becky queued for about two and a half hours to even get into the venue. Not because we were super early but that’s the amount of time it took for them to check our bags and give us our wristbands. I’ve been in longer queues, but it wasn’t a normal queue where there’s a couple of people beside you, no there’s a massive group trying to squeeze in all at once and even queue jump. Its stressful and frustrating.
My biggest advice is to get there as early as you can, and no I don’t mean camp out. If you want to meet your favourite YouTubers, being on time and organised is key. I mean this year their ticketing system for meet and greets was a disaster and basically didn’t give people the equal opportunity, it was simply first come first served and despite that being valid its still a bit sticky in my opinion. I mean not everyone can get there early in the first place, and you have groups of people who stick together and pull their mates in to the front of a queue. So its all a bit ridiculous. Me and Becky thought we were prepared but we certainly wasn’t enough.
If you’re not bothered about meet ups then there isn’t any worries of watching a panel, if anything I say go to as many panels and worry about meeting YouTubers later. A lot of them even just hang around after the panels or decide to do greets of their own without it organised, so don’t lose hope.
A silly rumor that people tell you before you go to SitC is that you can’t take food or drink with you, this is rubbish. Just don’t be that idiot that brings alcohol because that’s obviously not allowed, like use your common sense. Otherwise water, fizzy drinks and snacks you can definitely take in with you.
When we entered the venue we were given a goodie bag with a schedule for the day which was extremely helpful for planning our day.
Sadly we missed Dan and Phil because of the tickets being given out earlier than expected, so we decided to just chill around main stage and watch some of the performers and try and capture some photos of Dan and Phil and also Jack and Dean from afar. We weren’t surprised about not getting to meet Dan and Phil, but we didn’t let it spoil our day because we knew it would be slim. 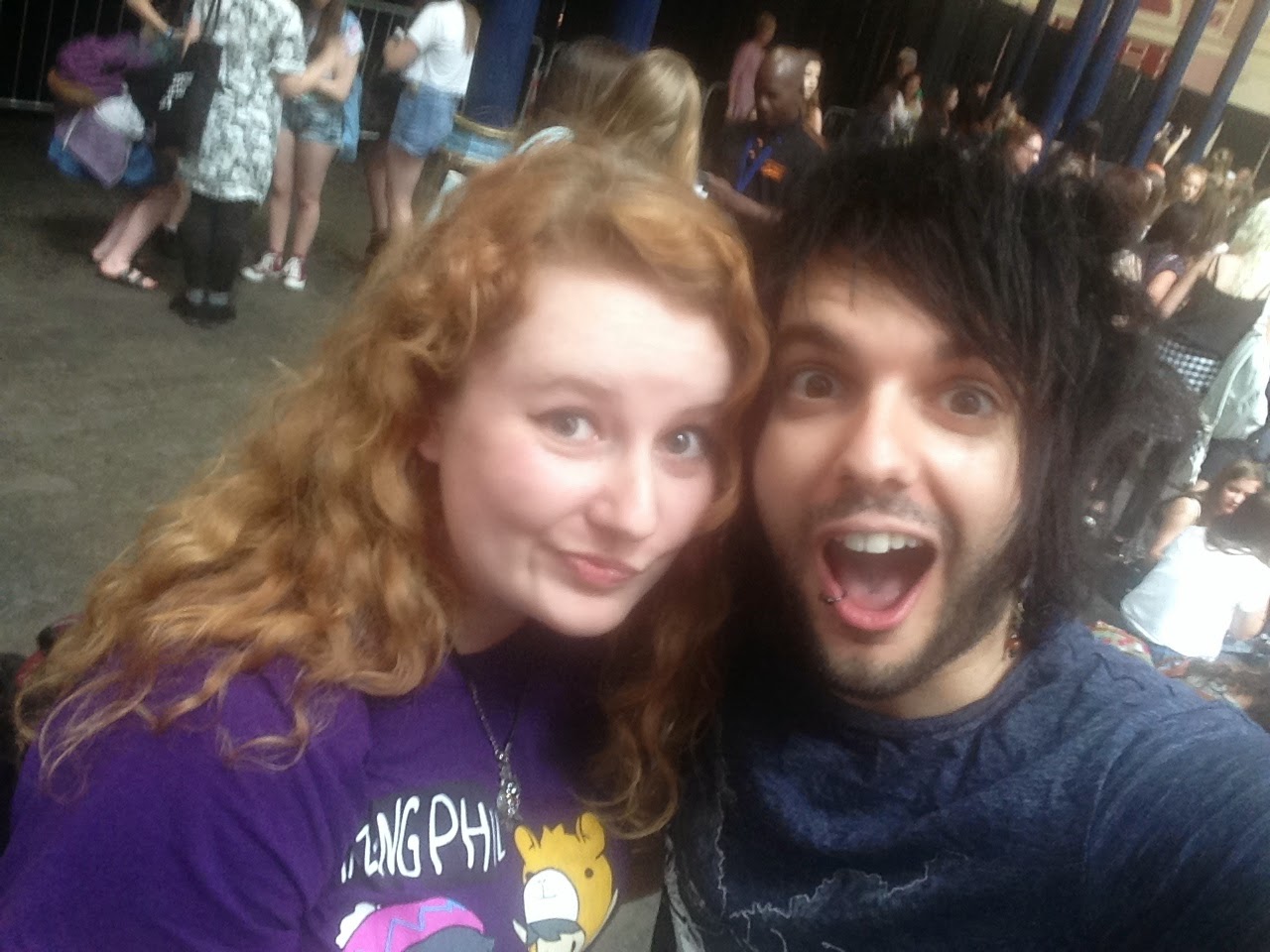 By complete luck and some great spotting from my friend Becky, she saw Ben Cook mooching around amongst some of the crowd. My natural instinct was “Becky we need to go and see if we can at least say hi to Ben, so we can say we met at least one YouTuber who we like!”
By then, Ben had been spotted by others and he formed his own queue to begin in his own informal meet and greet, from which he did for about six hours in the end- crazy!

Ben was incredibly sweet and greeted you with a big hug and asked how you were and just took his time. As you can obviously see above, Ben took two selfies of us on my phone which was awesome!
Top tip: Ben tends to prefer meeting viewers informally so he is often wandering around, so even if you’re not a big fan just go and say hi anyway because he is such a lovely guy, and gives the nicest hugs! Saying that this goes for any YouTubers you may see just chilling around the venue, just go and say hi- they don’t bite!
I do wish more YouTubers could do more informal meet ups, but its completely understandable for bigger YouTubers like Zoella, Alfie, Marcus, Dan and Phil, Tyler Oakley etc to not do these because it would be chaos.
My next great encounter of the day was buying an Emma Blackery “I like her she has girl balls” t-shirts, and to my surprise Emma was actually on her stall selling them to everyone.  I spotted her Dad, and Becky looked at me and was like Emma’s there too so obviously I had to get a tshirt now.
Emma is a very down to earth person despite what some people may think, and she’s just as funny off screen as she is on. Very friendly and appreciative of everyone buying her merchandise too.
Here we have below is my sneaky picture of Emma and t-shirt which was 104 of 500 that she made, very lucky to have one and its incredibly comfortable to wear. 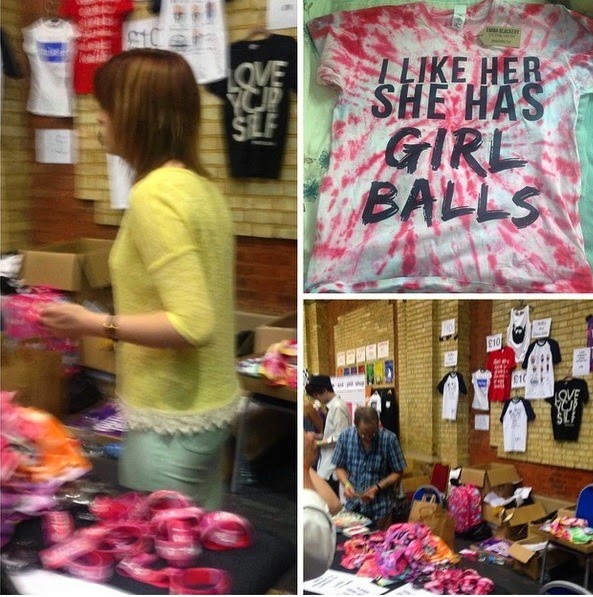 Me and Becky felt that the space difference between meet and greets as well as panels were stupidly close together, so if we went to one we certainly wouldn’t make it to another just in time. So we didn’t manage to go to any panels, which when we look back was a shame.
So again word of advice, check out a mix of panels and meet and greets if you can- take a chance!
I can tell you now, despite you not really doing much you get tired and I mean very tired. I definitely put this down to all the queuing and waiting around because it was so draining.
The last part of our afternoon was queuing for the meetup of Emma Blackery and Luke Cutforth, but again we got cut off. It was gutting and annoying because we wasted all that time queuing, but again that was our own choice.
I’m making this sound awfully boring, its really not. You meet all kinds of people in the queues and crowds around main stage and other venue rooms, so don’t think that you won’t get talking to others because you do naturally.
Whilst we were queuing for Emma and Luke, none other than my favourite travel YouTuber Louis Cole came into the room and formed his own informal meet up, and so immediately after the disappointment of being cut off from Emma and Luke’s queue we joined Louis’. This picture is terrible on my part, but do you know what it was the best moment of the weekend. Meeting your favourite YouTuber is something awesome.
Like Ben, Louis had time for everyone. Despite his long queue he took his time with everyone and make sure he didn’t disappoint and as you can tell from my face he certainly didn’t.

After our little chat we took three selfies on my phone and I went in for another hug, purely because I may never meet him again.

Personally if you want to meet any YouTuber it is by luck and patience, they are busy people and you need to respect that they can’t please everyone. They’re doing them formal meet and greets for around 2-3 hours, and I can’t imagine how exhausting it must be to keep a smile on their face and ensure they don’t disappoint anyone.

Overall my tips are to expect an awful lot of queuing, some disappointment are inevitable, but importantly just enjoy your time there and think of it as an experience you may never have again. Don’t be scared of making new friends because you can make tonnes.

I hope this in some way gave you at least a rough idea of what SitC is like, and was in some ways helpful. I had a great time and someday I’ll go back…when hopefully they have a better ticketing system.

Emma | 25 | Open University graduate blogging about books. ✨ I like cats, Hugh Jackman and anything with peanut butter. ❤ Sam

By continuing to use this site, you agree to the use of cookies.Accept